Which are the two staple food crops of India ? Compare and contrast the climatic and soil requirements of the two. [CBSE Sept. 2013]

Rice and wheat are two staple food crops of India 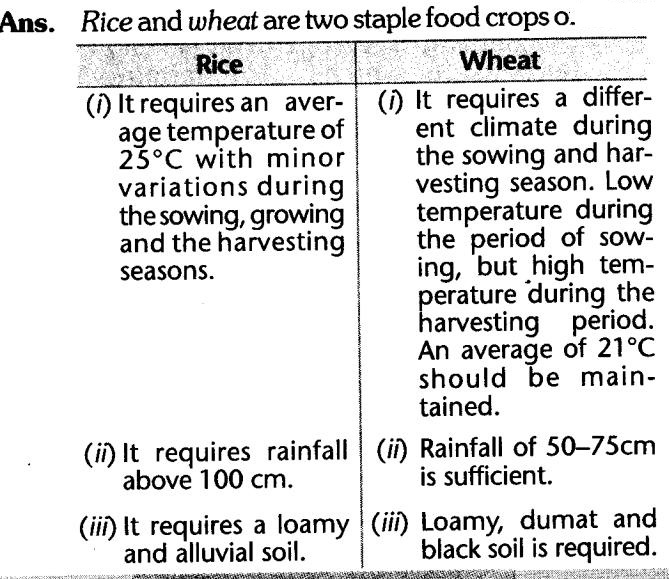 What type of climate is required for the cultivation of wheat ? Name any four important wheat producing states of India. [CBSE Sept. 2012]

Describe various technological and institutional reforms which led to the Green and White Revolution in India. [CBSE Sept. 2012]

Which states are the leading producers of the following horticultural crops ?
(i) Mangoes
(ii) Bananas
(iii) Grapes
(iv) Apples and Apricots

Look at the given picture carefully and answer the questions that follow : [CBSE 2009 (O)]
(i) Name the crop shown in the picture.
(ii) State the climatic conditions required for the cultivation of this crop.
(iii) Name the two major regions of growing this crop.

Explain the climatic conditions required for the production of cotton. Also mention the major cotton producing states of India.

"Today Indian farmers are facing a big challenge from international competition."What are the various factors responsible for this situation ?
Or
Why is the growth rate in agriculture decelerating ? [CBSE 2010(F)]

What is primitive (subsistence) farming ? Write any four features of subsistence farming. [CBSE Comp. (O) 2008]
Or
Why is subsistence agriculture still practised in certain parts of the country ? Give four reasons. [CBSE Sept. 2010]

Which crop is known as the “golden fibre”? Explain two geographical conditions essential for the cultivation of this crop. Mention any four uses.[CBSE 2012]
Or
What is known as ‘golden fibre’? Where is it grown in India and why ? Describe various uses of this fibre. [CBSE 2012]

Which are the two staple food crops of India ? Compare and contrast the climatic and soil requirements of the two. [CBSE Sept. 2013]

Compare the geographical conditions required for the production of cotton and jute. [CBSE 2014]