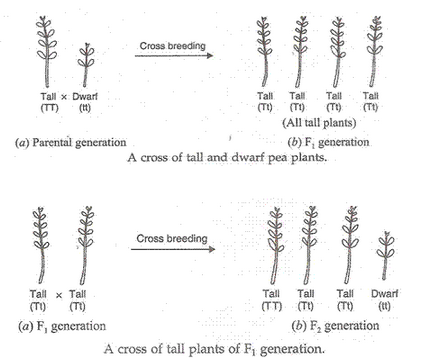 (b) When Mendel crossed pure-bred tall pea plants with pure-bred dwarf pea plants, he found that only tall pea plants were produced in the F1 generation. When Mendel further crossed the tall pea plants of the F1 generation, he found that the tall plants and dwarf plants were obtained in the ratio 3:1 in the F2 generation. Mendel noted that all the pea plants produced in the F2 generation were either tall or dwarf. There were no plants with intermediate height (or medium height) in-between the tall and dwarf plants. In this way, Mendel’s experiment showed that the traits (like tallness and dwarfness) are inherited independently. This is because if the traits of tallness and dwarfness had blended (or mixed up), then medium sized pea plants would have been produced.

Can the wing of butterfly and the wing of a bat be considered homologous organs ? Why or why not ?

How is the equal genetic contribution of male and female parents ensured in the progeny? [Delhi]

Name the various tools of tracing evolutionary relationships which have been used for studying human evolution.

Does the occurrence of diversity of animals on earth suggest their diverse ancestry also? Discuss this point in the light of evolution.

Why are human beings who look so different from each other in terms of size, colour and looks said to belong to the same species ?

How are fossils formed? Describe, in brief, two methods of determining the age of fossils. [All India]

(a)What is meant by ‘heredity’ ? What are the units of heredity.
(b) State Mendel’s first law of inheritance.

What evidence do we have for the origin of life from inanimate matter (lifeless matter) ?

How does the creation of variations in a species promote survival ?

During which stage can the chromosomes be seen clearly? Write the features of the eukaryotic and prokaryotic chromosomes.

Who provided the evidence of DNA as the genetic material? Write the names of the components of the DNA molecule.

Describe briefly four ways in which individuals with a particular trait may increase in a population. [Foreign]

With the help of suitable examples explain natural selection. [Foreign]

Name one variation in humans connected with ears.

Which of the following combinations of sex chromosomes produce a male child : XX or XY ?

(a) If a normal human cell has 46 chromosomes, how many chromosomes will be there in a human (;) sperm cell, and (ii) zygote ?
(b) What sizes of plants are produced if both parents have genes Tt ?

(a) What do you understand by the term ‘variation’ ?
(b) Name two human traits which show variation.

What name is given to the sequence of gradual changes over millions of years in which new species are produced ?

State one characteristic which shows that the birds are very closely related to dinosaurs.

Where did life originate on the earth ?

What is meant by acquired and inherited traits ? Explain with one example each.

Will geographical isolation be a major factor in the speciation of a self-pollinating plant species ? Why or why not ?

In evolutionary terms, can we say which among bacteria, spiders, fish and chimpanzees have a ‘better body design’ why or why not ?

How is the equal genetic contribution of male and female parents ensured in the progeny?

How do embryological studies provide evidence for evolution?

How do homologous organs provide evidence in support of evolution?

What is meant by the term speciation? List four factors which could lead to speciation. [Delhi]

State the meaning of inherited traits and acquired traits. Which of the two is not passed on to the next generation? Explain with the help of an example.

Mendel said that the characteristics or traits of organisms are carried from one generation to the next by internal factors which occur in pairs. What is the modern name for these factors ?

What are the chromosomes XY and XX known as ?

Which of the two, sperm or ovum, decides the sex of the child ?

a) Name the scientist who gave the laws of inheritance.
(b) Name an animal in which individuals can change sex. What does this indicate ?

(a) What will you get in the F1 and F2 generations in the following cross ?
Pure tall pea plant x Pure dwarf pea plant
(b) Is it an example of monohybrid cross or dihybrid cross ?

In the F2 generation of a cross, progeny having different traits are produced in the ratio 3:1. State whether it is a monohybrid cross or a dihybrid cross ? Give one example of such a cross.

Does genetic combination of mother play a significant role in determining the sex of a new born baby ?

(a) Why did Mendel choose pea plants for conducting his experiments on inheritance ?
(b) State Mendel’s second law of inheritance.

Name the scientist who gave the theory of evolution.